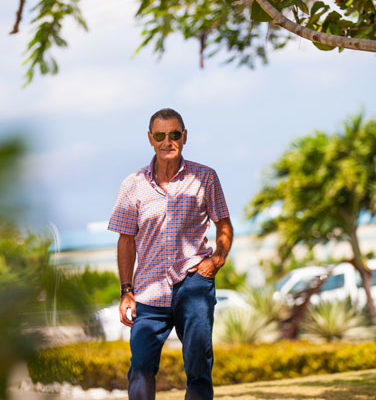 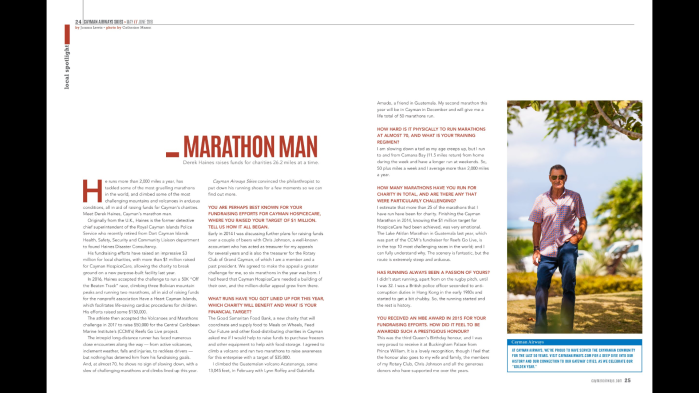 He runs more than 2,000 miles a year, has tackled some of the most gruelling marathons in the world, and climbed some of the most challenging mountains and volcanoes in arduous conditions, all in aid of raising funds for Cayman’s charities. Meet Derek Haines, Cayman’s marathon man.

His fundraising efforts have raised an impressive $3 million for local charities, with more than $1 million raised for Cayman HospiceCare, allowing the charity to break ground on a new purpose-built facility last year.

In 2016, Haines accepted the challenge to run a 50K “Off the Beaten Track” race, climbing three Bolivian mountain peaks and running two marathons, all in aid of raising funds for the nonprofit association Have a Heart Cayman Islands, which facilitates life-saving cardiac procedures for children. His efforts raised some $150,000.

The athlete then accepted the Volcanoes and Marathons challenge in 2017 to raise $50,000 for the Central Caribbean Marine Institute’s (CCMI’s) Reefs Go Live project.

The intrepid long-distance runner has faced numerous close encounters along the way — from active volcanoes, inclement weather, falls and injuries, to reckless drivers — but nothing has deterred him from his fundraising goals. And, at almost 70, he shows no sign of slowing down, with a slew of challenging marathons and climbs lined up this year.

Cayman Airways Skies convinced the philanthropist to put down his running shoes for a few moments so we can find out more.

You are perhaps best known for your fundraising efforts for Cayman HospiceCare, where you raised your target of $1 million. Tell us how it all began.

Early in 2014 I was discussing further plans for raising funds over a couple of beers with Chris Johnson, a well-known accountant who has acted as treasurer for my appeals for several years and is also the treasurer for the Rotary Club of Grand Cayman, of which I am a member and a past president. We agreed to make the appeal a greater challenge for me, so six marathons in the year was born. I had heard that Cayman HospiceCare needed a building of their own, and the million-dollar appeal grew from there.

What runs have you got lined up for this year, which charity will benefit and what is your financial target?

The Good Samaritan Food Bank, a new charity that will coordinate and supply food to Meals on Wheels, Feed Our Future and other food-distributing charities in Cayman asked me if I would help to raise funds to purchase freezers and other equipment to help with food storage. I agreed to climb a volcano and run two marathons to raise awareness for this enterprise with a target of $35,000.

I climbed the Guatemalan volcano Acatenango, some 13,045 feet, in February with Lynn Roffey and Gabriella Amado, a friend in Guatemala. My second marathon this year will be in Cayman in December and will give me a life total of 50 marathons run.

How hard is it physically to run marathons at almost 70, and what is your training regimen?

I am slowing down a tad as my age creeps up, but I run to and from Camana Bay (11.5 miles return) from home during the week and have a longer run at weekends. So, 50 plus miles a week and I average more than 2,000 miles a year.

How many marathons have you run for charity in total, and are there any that were particularly challenging?

I estimate that more than 25 of the marathons that I have run have been for charity. Finishing the Cayman Marathon in 2014, knowing the $1 million target for HospiceCare had been achieved, was very emotional. The Lake Atitlan Marathon in Guatemala last year, which was part of the CCMI’s fundraiser for Reefs Go Live, is in the top 10 most challenging races in the world; and I can fully understand why. The scenery is fantastic, but the route is extremely steep and arduous.

Has running always been a passion of yours?

I didn’t start running, apart from on the rugby pitch, until I was 32. I was a British police officer seconded to anti-corruption duties in Hong Kong in the early 1980s and started to get a bit chubby. So, the running started and the rest is history.

You received an MBE award in 2015 for your fundraising efforts. How did it feel to be awarded such a prestigious honour?

This was the third Queen’s Birthday honour, and I was very proud to receive it at Buckingham Palace from Prince William. It is a lovely recognition, though I feel that the honour also goes to my wife and family, the members of my Rotary Club, Chris Johnson and all the generous donors who have supported me over the years.