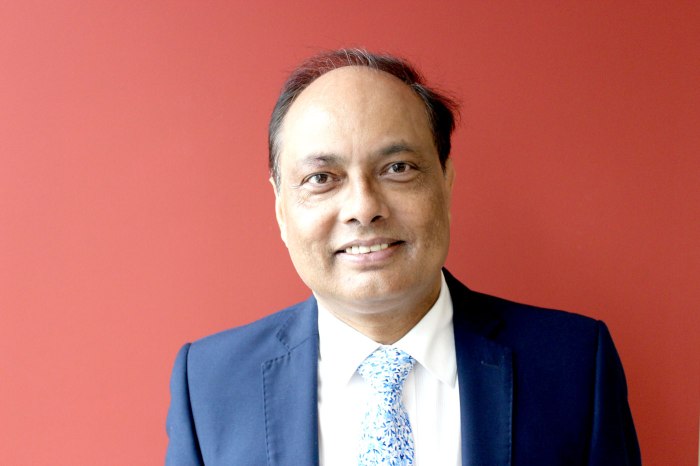 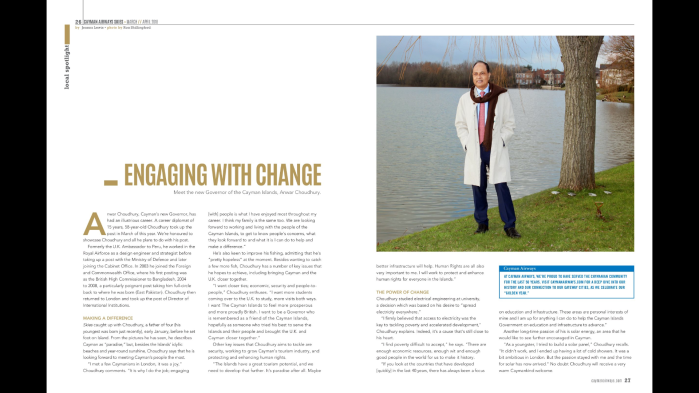 Delighted to have been selected as the first journalist to interview Cayman’s new Governor, Anwar Choudhury.

Anwar Choudhury, Cayman’s new Governor, has had an illustrious career. A career diplomat of 15 years, 58-year-old Choudhury took up the post in March of this year. Skies magazine is honoured to showcase Choudhury and all he plans to do with his post.

Formerly the U.K. Ambassador to Peru, he worked in the Royal Air Force as a design engineer and strategist before taking up a post with the Ministry of Defence and later joining the Cabinet Office. In 2003 he joined the Foreign and Commonwealth Office, where his first posting was as the British High Commissioner to Bangladesh, 2004 to 2008, a particularly poignant post taking him full-circle back to where he was born (East Pakistan). Choudhury then returned to London and took up the post of Director of International Institutions.

Skies caught up with Choudhury, a father of four (his youngest was born just recently), early January, before he set foot on Island. From the pictures he has seen, he describes Cayman as “paradise,” but, besides the Islands’ idyllic beaches and year-round sunshine, Choudhury says that he is looking forward to meeting Cayman’s people the most.

“I met a few Caymanians in London, it was a joy,” Choudhury comments. “It is why I do the job; engaging [with] people is what I have enjoyed most throughout my career. I think my family is the same too. We are looking forward to working and living with the people of the Cayman Islands, to get to know people’s concerns, what they look forward to and what it is I can do to help and make a difference.”

He’s also keen to improve his fishing, admitting that he’s “pretty hopeless” at the moment. Besides wanting to catch a few more fish, Choudhury has a number of key issues that he hopes to achieve, including bringing Cayman and the U.K. closer together.

“I want closer ties; economic, security and people-to-people,” Choudhury enthuses. “I want more students coming over to the U.K. to study, more visits both ways. I want The Cayman Islands to feel more prosperous and more proudly British. I want to be a Governor who is remembered as a friend of the Cayman Islands, hopefully as someone who tried his best to serve the Islands and their people and brought the U.K. and Cayman closer together.”

Other key issues that Choudhury aims to tackle are security, working to grow Cayman’s tourism industry, and protecting and enhancing human rights.

“The Islands have a great tourism potential, and we need to develop that further. It’s paradise after all. Maybe better infrastructure will help. Human Rights are all also very important to me. I will work to protect and enhance human rights for everyone in the Islands.”

The Power of Change

Choudhury studied electrical engineering at university, a decision which was based on his desire to “spread electricity everywhere.”

“I firmly believed that access to electricity was the key to tackling poverty and accelerated development,” Choudhury explains. Indeed, it’s a cause that’s still close to his heart.

“I find poverty difficult to accept,” he says. “There are enough economic resources, enough wit and enough good people in the world for us to make it history.

Another long-time passion of his is solar energy, an area that he would like to see further encouraged in Cayman.

“As a youngster, I tried to build a solar panel,” Choudhury recalls. “It didn’t work, and I ended up having a lot of cold showers. It was a bit ambitious in London. But the passion stayed with me and the time for solar has now arrived.” No doubt Choudhury will receive a very warm Caymankind welcome.