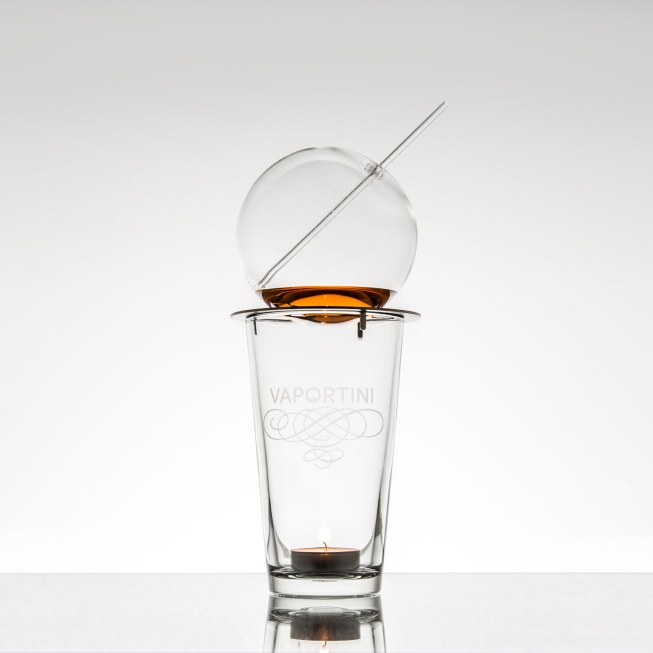 There’s a new craze among the cocktail crowd meaning you no longer have to actually drink your poison of choice.

The newly launched Vaportini allows lovers of fine spirits to inhale their drink instead of drinking it the old fashioned way. It’s a trend that is catching on across high-end bars and restaurants around the globe, mirroring the rising interest in gadgetry for the cocktail scene.

The Vaportini consists of a hand-blown glass globe the size of a large orange, which sits on a standard pint glass. A one ounce shot of spirit is poured into the globe via a funnel, while at the bottom of the pint glass is a tea-light candle. Once lit, the candle heats up the liquor, which starts to evaporate, filling the sphere with its flavorful vapors, which are then inhaled through a straw.

Chicago based owner and inventor of the Vaportini, Julie Palmer, was inspired to create the chemistry like gadget after a visit to Helsinki. During a trip to an outdoor sauna, a local poured a bottle of vodka over the hot coals so the vapors could be breathed in and enjoyed. Taken with the idea of inhaling the vodka – rather than drinking it – Julie set to work on a way in which to recreate the experience at home, minus the sauna, of course. With the help of her father, an engineer, the Vaportini was born.

Locally, the boozy product is being distributed by Cayman Spirits Company, producers of Seven Fathoms Rum, with bartenders at Royal Palms and Agua already in on the act.

Walker Romanica, co-owner of Cayman Spirits Company, says he came across the product at a trade show. He describes it as a “really neat product,” offering consumers a new and fun way to experience their favorite spirit.

“The Vaportini removes the harshness of the alcohol so you really get to taste the flavor profiles of the spirit,” Walker says. “In the case of Seven Fathoms Rum you will be able to pick apart and taste the notes of citrus peel, vanilla, mocha and chocolate.”

Mixologist Lachlan Morris at Royal Palms often uses the Vaportini in cocktail competitions. He says the device offers another element to the cocktail experience.

“I use it as a palate cleanser,” he says. “For example you could use Grand Marnier, which will leave a bittersweet orange flavor in your mouth.

“You can use pretty much anything in the Vaportini. I would stay away from the milkier spirits though, like Baileys, but anything else is a go.”

Always up for trying something new, the team at Flava gave the Vaportini a whirl. Our verdict? A fun conversational piece – but nothing quite beats slowing sipping on your favorite cocktail of choice.

One thought on “Flava magazine: Inhaled, not drunk”