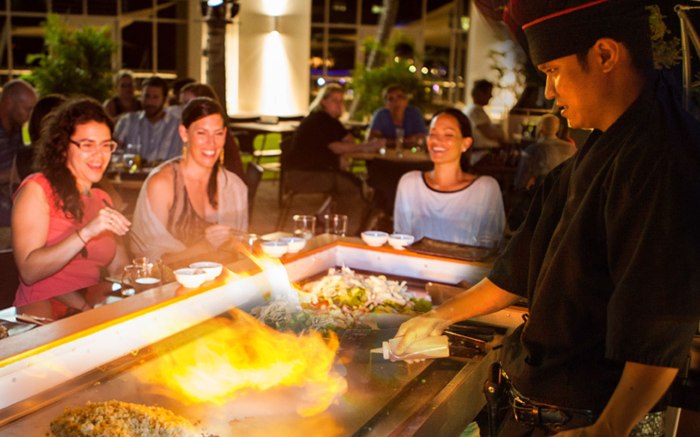 Teppanyaki is a style of Japanese cuisine which uses an iron plate to cook the food. The word is derived from “teppan,” which means iron plate, and “yaki,” which means grilled, broiled or pan-fried.

At Mizu, the food is cooked in front of guests who sit around an eight-seat, horseshoe-shaped table, with the teppanyaki chef, Jayson Santiago, taking center stage.

Originally from the Philippines, Santiago came up with the idea of adding a teppanyaki experience for diners to enjoy at Mizu, having worked formerly as a chef at Benihana, a renowned chain of teppanyaki restaurants founded in 1964 in New York City. After some initial research, the owners of Mizu decided to set up the teppanyaki table in the restaurant’s outdoor seating area, with Camana Bay’s harbor in the background.

Teppanyaki is an interactive experience, and Santiago is keen to get everyone involved and put on a show. During the meal, he showcases an impressive display of samurai-esque knife skills as the vegetables and meats are sliced, chopped and diced on the grill. As he moves the food deftly around the iron plate, he explains each of the dishes and the ingredients being used. At one point during the meal, he throws an egg up in the air, breaking it into two perfect portions mid-air with his knife. Then there’s the “flaming onion volcano,” stacked onion slices that sizzle on the grill before being set alight in a burst of flames. It all makes for some fun culinary drama.

The meal starts with a refreshing cucumber wakame salad, followed by traditional miso soup. Next is the “omakse” – or chef’s selection – which changes daily. When my guest and I visited, the omakse was yaki soba, a classic Japanese stir-fry consisting of ramen-style noodles and bite-sized vegetables, all cooked on the teppanyaki grill.

The main course follows, which includes a selection of meats and seafoods, including rib eye, Caribbean lobster, scallop, tuna, shrimp, sesame chicken, teriaki salmon and citrus-infused calamari. Each of the main courses is served with vegetable fried rice and sauteed vegetables – also cooked on the teppanyaki grill – along with a selection of dips.

There are recommended wine pairings for each main course too, or, if you would rather enjoy a full Japanese-style experience, there’s a wide selection of sakes to choose from.

The experience even extends to the dessert – with a selection of fresh fruits diced and heated up on the grill before being mixed with a large scoop of ice cream and served in a hollowed out orange. Each course is cooked at very high heat with just a drizzle of oil. The accompanying sizzling sound and delicious aromas adding to the fun of the whole experience.

According to restaurant manager Steve Shienfield, Mizu offers the only outdoor, waterside teppanyaki table in the Caribbean.
“Having a chef cook for you in front of you is an experience that not many people get to enjoy,” Shienfield says. “It makes the night out a great experience.”

He adds, “Because the table is small and intimate, people can easily interact with those that are sitting across the table. Complete strangers become friends by the end of the meal.”