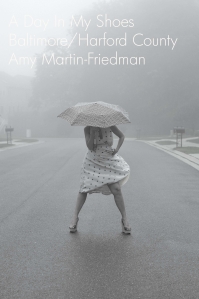 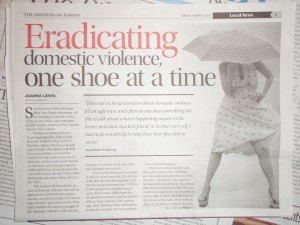 San Francisco-based photographer Amy Martin-Friedman will be heading to Cayman to host A Day In My Shoes, a photographic project to raise money for the Cayman Islands Crisis Centre.

Women are being invited to be photographed by Amy in their favourite shoes, be they a pair of Manolos, Jimmy Choos or a simple pair of Clarks. The photos will then form an exhibition to be held in October to help raise awareness of domestic violence and sexual assault, as well as be used in a photography coffee table book. Proceeds from the cost of the shoot, the sale of the coffee-table book and prints will go direct to the CICC.

The project will include five victims of domestic violence who will be sponsored to tell their story anonymously, as well as a further 25 women who all have a great story to tell. Their story, whether it is about a struggle in life, domestic violence, work, success, triumph or loss of a loved one will be told alongside their photo.

A Day In My Shoes has been held in various cities across the US and this is the first time the photographer will take the project international. The idea for the project was initially dreamt up by Amy back in 2008 when she decided she wanted to use her creative skills to help women in her community. With Valentine’s Day nearing she decided to combine her two passions – shoes and photography.

“Each year I hated always wondering if I would have a Valentine, and one year I decided to be my own,” she says. “I decided to buy myself a fabulous new pair of shoes, strut down Fifth Avenue and love myself. They are my favourite accessory, my moment to share a little of who I am with just one little touch of my outfit. They really do tell so much about a woman, they are empowering. A new pair of shoes always puts some pep in my step.

“I then started thinking about other single women and decided to get them to pose for a portrait in their favourite pair of shoes, as a way for them to be their own Valentine and to show them how they too could conceivably walk down Fifth Avenue with pep in their step,” she explains.

Amy then started to conceive a way in which she could roll out the project further to help raise funds for charities. A victim of domestic violence herself, it seemed only natural to her to focus her efforts on raising funds to help others. Through artful photography she could tell their stories anonymously, with just lower bodies, and of course the beautiful shoes, captured in the shot. A Day In My Shoes was born.

Amy started the project off in her hometown of San Francisco for an Asian women’s shelter and soon branched out to other cities across the US, including Los Angeles, New York, Baltimore, Dallas and Chicago.

“My primary focus is to raise awareness and monies, but most of all I feel like this project has become therapy for my clients,” Amy says. “A story is told and this allows women an opportunity to tell their story with no name or face mentioned.”

Over the years the project has garnered a following, with many celebrities including Carrie Ann Inama, Taylor Armstrong and Edyta Sliwinska becoming involved.

During a shoot in Baltimore, Amy met Lyn Boone, a supporter of the CICC and the two of them decided to get together to bring the project to the Cayman Islands.

“I’ve only been to Cayman once on a cruise and I can’t wait to come back and shoot in the sun,” Amy says.

A freelance photographer, Amy has more than 20 years experience in still and real life photography. She has photographed the best life has to offer, as well as the worst, including the bombings of the Federal Building in Oklahoma City and the destruction of the World Trade Center in New York.

“There isn’t a lot of attention about domestic violence. It’s an ugly topic and often no one does something like this to talk about what is happening maybe in the home, next door, to a best friend, or to their own self,” Amy explains. “I had to do something to help those that often feel so alone.”

Indeed, over the years, Amy has been privy to many stories.

“I had a woman from one of my latest series speak about the most horrific story. Her children had been sexually abused by family members. How could someone so close to you and your family prey on a child and hurt and potentially destroy them for the rest of their lives? Its stories like these that motivate me to work harder and hopefully one day put a stop to this.”

Last year, the CICC provided safe shelter for 120 women and children, a 30 per cent increase over previous years and responded to 155 crisis calls regarding domestic abuse and sexual assault.

The location of the CICC is kept secret so that women and children who are assisted can know that they’re safe.

Each photo shoot will cost $650, with all funds going directly to the crisis centre. In return, participants will receive a personalised 16 by 20 inch photo canvas, be featured in a photography coffee table book and have their photograph on display at the exhibition in October. The images will be shot by Amy Martin Friedman between 24 and 26 March.